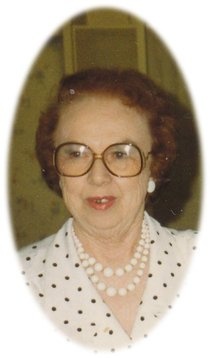 Funeral services for Marvel G. Olson, age 98, of Albert Lea, will be held at 1:30 p.m. on Monday, March 27, 2017 at Bayview/Freeborn Funeral Home.  Rev. Elizabeth Endicott will officiate. Interment will be at Graceland Cemetery.  Visitation will be one hour prior to the service at the funeral home on Monday. Online condolences are welcome at www.bayviewfuneral.com.

Marvel passed away on March 22, 2017 at Thorne Crest Senior Living Community where she lived for the past four years.

Marvel G. Olson was born in Freeborn County on September 13, 1918. Marvel lived most of her life in Albert Lea.  She moved in the 1940s to California to be with her husband who was in the Army.  During her time in California, she worked various retail positions and also worked for Standard Oil Refinery putting up 60 octane gas tanks for the Air Corps.  When her husband was sent overseas, she returned to Albert Lea.  She also worked at Wilson’s and as an assistant aide for Thorne Crest.  Marvel was a member of Salem Lutheran Church.

Marvel is survived by several nieces and nephews in Minnesota and in other states. She was preceded in death by her husband of 36 years, Kenneth Olson, who passed away in 1978.

To order memorial trees or send flowers to the family in memory of Marvel Olson, please visit our flower store.