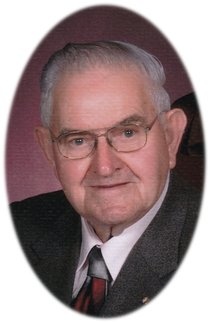 Funeral services for Melvin W. Wittmer, age 90, of Albert Lea, will be held at 11:00 a.m. on Monday, March 6, 2017 at Central Freeborn Lutheran Church.  Rev. Matt Griggs will officiate. Interment will be at Bear Lake Cemetery.  Military Honors will be accorded by local servicemenâ€™s organizations. Visitation will be one hour prior to the service at the church on Monday. Online condolences are welcome at www.bayviewfuneral.com.

Melvin William Wittmer was born August 31, 1926 on the home farm near Conger to Fred and Anna (Schwemmler) Wittmer.  He grew up and attended school in the Conger area.  He farmed until entering the Army in February of 1954 during the Korean War.  He was honorably discharged in January of 1956 as a Specialist Third Class. Melvin met his first wife, Therese Gottselig while he was in the service in Germany.  They were married February 17, 1957.  Melvin adopted Thereseâ€™s son, Ottmar, and the couple had another son, Eugene.  They were also foster parents to 12 children.  Therese passed away in 1981.  On May 12, 1985, Melvin married Jeanette Carlson; she passed away in 1993. On July 29, 1995, Melvin was united in marriage to Harriet (Schewe) Galbraith. Melvin worked for 22 years as a custodian with the Alden-Conger Schools and was a greeter at Wal-Mart for 9 years. Melvin was a member of Concordia Bear Lake Church, Central Freeborn Lutheran Church, Luther League, Eagles, V.F.W., American Legion, Elks, and Conger Senior Citizens.  He was a Bell Ringer at church and enjoyed playing 500 with Conger Seniors Card Club.

Melvin was preceded in death by his parents; sisters, Ruby and Frieda; son, Eugene; two wives, Therese and Jeanette; and step-son, Kevin Schewe.

To order memorial trees or send flowers to the family in memory of Melvin William Wittmer, please visit our flower store.