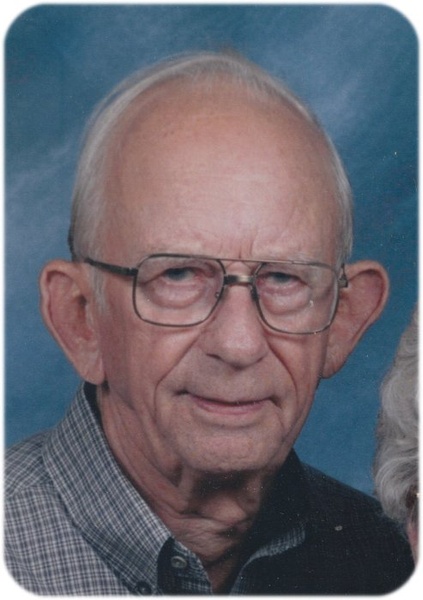 Funeral services for Merle L. Martinson, age 93, of Alden, will be held at 10:30 a.m. on Saturday, August 11, 2018 at Redeemer Lutheran Church in Alden.  Rev. Daphne Hamborg will officiate. Interment will be at Alden Cemetery.  Military Honors will be accorded by the Alden American Legion Honor Guard.  Visitation will be from 5:00-7:00 p.m. on Friday, August 10 at Bayview/Freeborn Funeral Home and one hour prior to the service at the church on Saturday.

Merle L. Martinson was born on October 7, 1924 in Scarville, Iowa, the son of Ingebrit O. and Gladys M. (Larson) Martinson.  He grew up in Lake Mills, Iowa, attending country school near Scarville and in Lake Mills. In October of 1944, Merle enlisted in the U.S. Army serving in the Pacific Theatre of Operation during World War II.  He was honorably discharged in November of 1946.  On July 8, 1948, Merle was united in marriage to Phyllis A. Frantum at the Wells Methodist Church.  Merle worked as a plumber for Ebert Plumbing & Heating and then operated his own business, Alden Plumbing & Heating.  Merle was a member of Redeemer Lutheran Church in Alden.  He was very active in the Alden community.  He was as a member of the American Legion where he held the positions of commander and adjutant.  Merle also served on the School Board and the City Council. He enjoyed fishing, dancing, hunting, and playing cards.  Merle loved his favorite car, a ’35 Ford Coupe with a rumble seat.

To order memorial trees or send flowers to the family in memory of Merle L Martinson, please visit our flower store.