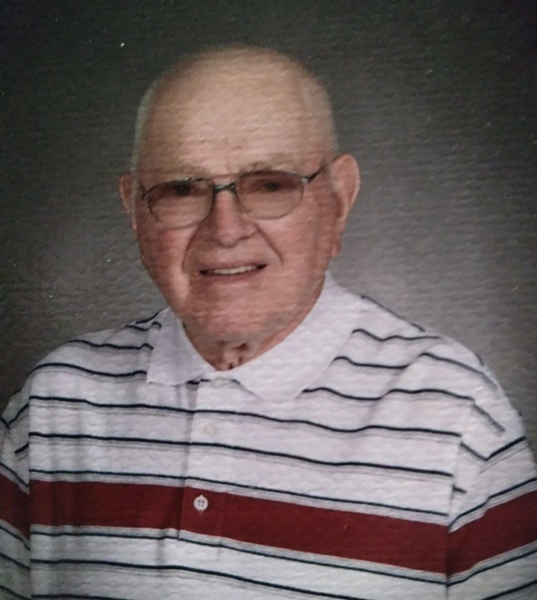 Mervel Carlyle Folie, Jr., 94, of Clarks Grove, passed away on Sunday, April 10, 2022 at Good Samaritan Home of Albert Lea.  A Memorial Service will be held at 2PM on Saturday, April 30, 2022 at Central Freeborn Church with Rev. Matt Griggs presiding.  Visitation will be one hour prior to the services at the church.  Burial will be at North Freeborn Cemetery.

Mervel was born on March 27, 1928 in Bancroft Township to Mervel, Sr. and Theresa (Jacobson) Folie.  He was confirmed at East Freeborn Lutheran Church. Mervel attended local area schools and graduated from Albert Lea High School in 1946.  After finishing school, Mervel enlisted in the United States Navy and served during the Korean War.  Mervel met Beverly Jackson at the cafe in Ellendale and the two were united in marriage on January 19, 1954 at East Freeborn Church.  The couple settled down in Clarks Grove to start their family.  To this union three children were born.

Mervel worked many jobs over the years.  But he mainly worked for local creameries around the Clarks Grove area. He retired as a maintenance man after working for over twenty years at Universal Tire Warehouse.  Mervel also farmed at home in his spare time.  He farmed corn, beans, raised pigs and steers occasionally.

Mervel was a card player and enjoyed playing with friends.  He was also an avid gardener and had two big gardens at home.  He raised a wide variety of vegetables.

Mervel is survived by his wife of 68 years, Beverly; sons, Bruce, Ricki (Virginia), Robert (Teresa); many grandchildren and great grandchildren; brother, David Folie; sister, Dorothy Callahan; and many other loving relatives and friends.

Mervel is preceded in death by an infant daughter and six siblings.

To order memorial trees or send flowers to the family in memory of Mervel Carlyle Folie, Jr., please visit our flower store.