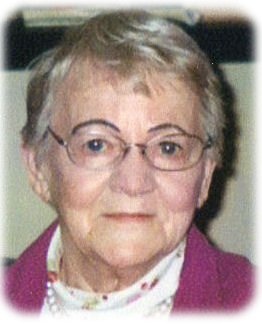 Funeral services will be conducted at 11 A. M. Wednesday, May 24th at Mansfield church, Mansfield, Minnesota for Mescal Loraine Gooden, 90, who died peacefully in her sleep Thursday night, May 18, 2017, on the farm near Emmons, Minnesota, where she had lived since 1946.  Visitation will be held Tuesday , May 23rd from 5 to 7 PM  at Bayview Funeral Home in Albert Lea and prior to the service at the church.  Interment will follow at Schneider Cemetery.

Mescal was born on Mother’s Day, May 8, 1927, in a farm house near Leland in Winnebago County, Iowa. The fifth of Leo and Laura (Oyer) Halvorsen’s seven children, she was baptized in the Methodist church in Forest City, Iowa, and attended first grade in Leland, Iowa.

In 1933 the family moved to Worth County, Iowa, and lived for one year on her maternal grandparents’ farm. In 1934 they moved to Freeborn County, Minnesota where she attended the District 84 country school. She graduated from Emmons High School in 1944 as both valedictorian and president of her graduating class.

On November 14, 1944, she was united in marriage to Donald L. Gooden by the Reverend. A. H. Oerke in the Emmons church parsonage. Upon Don’s honorable discharge from the Navy in 1946, they moved to a farm on “Wall Street,” now known as 640th Avenue.  They farmed and, for a few years, ran Valley Manufacturing Company.  Until his death, they were active in the Freeborn County DFL and Farmers’ Union organizations.  Mescal’s hobbies included reading, photography – she delighted especially in taking “candid” shots -- and writing poems for family and friends for birthdays and other special occasions. She enjoyed crossword and word puzzles and was a die-hard Minnesota Twins fan. She, Don, and the farm were the “touch stone” and the “constant” in the lives of her children, grandchildren, and (later) her great - grandchildren. She delighted in reading stories and singing nonsense songs to her grandchildren, great-grandchildren and even great-great grandchildren.  She kept everyone well (too well) fed, and was known to her youngest grandchild as the “cookie grandma," but after everyone was fed she was first at the table to play games, particularly card games, with her family.

To order memorial trees or send flowers to the family in memory of Mescal Loraine Gooden, please visit our flower store.