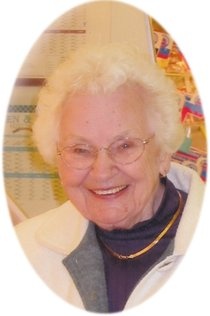 Funeral services for Mildred Hunnicutt Woodside, age 104, of Albert Lea, will be held at 2:00 p.m. on Thursday, August 4, 2016 at Bayview/Freeborn Funeral Home.  Rev. Todd Walsh will officiate. Interment will be at Graceland Cemetery.  Visitation will be one hour prior to the service at the funeral home.

Mildred Cecelia Ringham Hunnicutt Woodside, daughter of Thomas and Bertina Ringham, was born on May 5, 1912 on a farm near Blue Earth, MN.  She attended school in the Blue Earth area.  Mildred married her childhood sweetheart, Vern Hunnicutt, on February 4, 1933, in Blue Earth. They moved to Albert Lea in 1937. Vern died January 12, 1975. Mildred married Gary Woodside on January 22, 1977. Gary passed away on July 31, 2000. Mildred was a member of First Lutheran Church.  She enjoyed crocheting, playing cards, and spending time with friends and family. She will be remembered for her positive attitude and love of people.

To order memorial trees or send flowers to the family in memory of Mildred Hunnicutt Woodside, please visit our flower store.