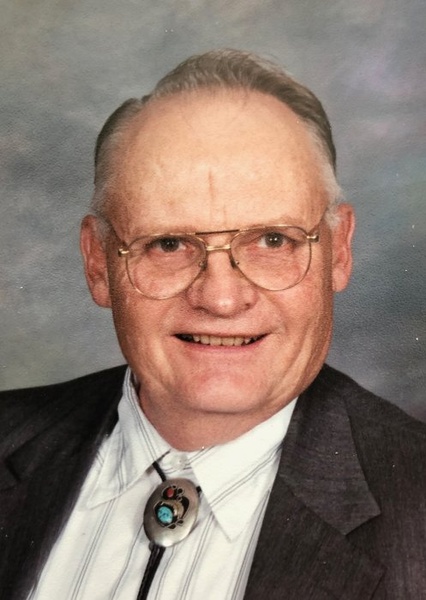 Milton Edwin Haroldson, 86, died of natural causes on Sunday, February 23rd, at home. Visitation will be
at Bayview Freeborn Funeral Home Friday, February 28th, from 5 to 7 p.m. Funeral service will be held
at Round Prairie Lutheran Church at 11 a.m. on Saturday the 29th, visitation with the family to begin at
10 a.m.
Milt was born to Arman and Marie Haroldson on April 5th, 1933, at home in rural Freeman Township,
Freeborn County, Minnesota. He lived in the Glenville area all of his life, sixty-four years on the farm on
South Broadway. Finally persuaded to leave country life when he could no longer drive. he and his wife,
Eva (Holstad), built a twin-home on the northern edge of Albert Lea.
Milt was a faithful member of Round Prairie Lutheran Church all of his life. He found and married his
lifelong dance partner, Eva (Holstad) Porter, on June 2, 1973 at Grace Lutheran Church in Albert Lea. He
also married her family of four teenagers, Craig Allen, Cathy Ann, Dennis James, and David John. The
quintessential Norwegian bachelor farmer living with his mother, he had no idea what he was getting
into. All survived the experience and became a close, loving family.
Milt was an expert sawyer, building portable sawmills from scratch, repaired and sharpened saws for
others, and worked on site in many woods in the area, logging and sawing many board feet of lumber..
He was also an expert machinist and welder. Earlier in life he was a farmer, and drove bulldozers,
specializing in shoulder finishing, when the Interstate Highway system expanded into southern
Minnesota.
He is survived by his wife, Eva, step-children Cathy, Dennis, and David and their spouses, sisters Gail
and Jean (Hoffmann) Porter, and Steve Bonine, grandchildren Jasmine, Lauren, Erin, Caitlin, and Nathan
Porter, and many nieces and nephews, all of whom he loved dearly.
Milt is preceded in death by his grandparents Torger and Petra Haroldson, grandparents Edward and Ida
Stewart, parents Arman and Gladys Marie (Stewart) Haroldson, his sisters Dawn (Jack) Freeland,
Florence (Lloyd) LaCore, and Norma (James) Goskeson, neice Diane Olsen, parents-in-law John and
Edith Holstad, sister-in-law Helen Holstad, brother-in-law Ernest Bergo, and step-son Craig Porter.
Milt was a gentle man, loved by family, friends, and neighbors.

To order memorial trees or send flowers to the family in memory of Milton Haroldson, please visit our flower store.