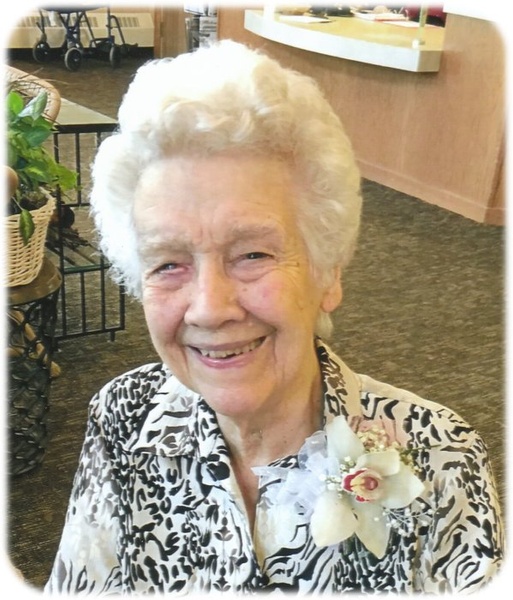 Memorial services for Moya Rose (Chalmers) Thorson, age 92, formerly of Albert Lea, will be held at 2:00 p.m. on Saturday, January 12, 2019 at Grace Lutheran Church.  Pastor Jennifer Gonsalves will officiate. A private family interment will take place at a later date.  Friends may greet the family one hour prior to the service at the church on Saturday. Online condolences are welcome at www.bayviewfuneral.com.

Moya Rose Thorson was born on August 31, 1926 in Exeter, England, the daughter of Frederick and Ada (Watkins) Chalmers.  She grew up in Exeter.  During WWII she met and was united in marriage to John Thorson on July 27, 1945 in Exeter. Later that year, the couple moved to Albert Lea.  She worked at the Skyline Supper Club for 27 years.  She was an active member of Grace Lutheran Church, including the woman’s circle.  She would serve as a poll worker for most every election. Moya enjoyed baking and she was well known for her coffee cakes.  She had a passion for reading. Staff at the library joked that she read every book in certain sections of the library.  She loved spending time with her family, especially her grandchildren.  Moya did not like the cold, so she regularly wintered in Arizona, and was able to be with her family who lived there.

Moya was preceded in death by her parents, Frederick and Ada; former husband, John; and son-in-law, Robert Reed.

To order memorial trees or send flowers to the family in memory of Moya Rose Thorson, please visit our flower store.