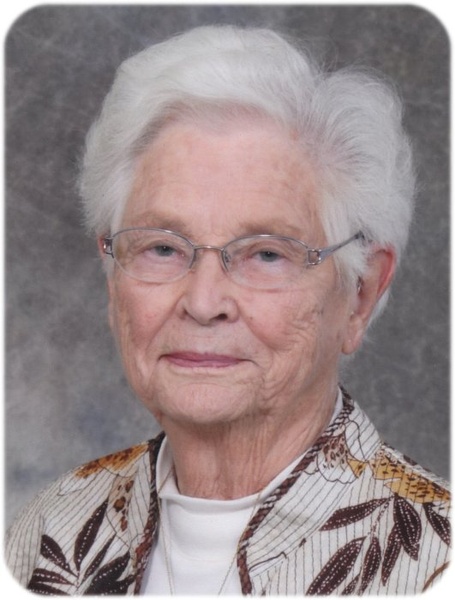 Memorial services for Muriel H. Berry, age 94, of Lake Mills, Iowa will be held at 11:00 a.m. on Monday, April 16, 2018 at Emmons Lutheran Church.  Rev. Christopher Martin will officiate. Interment will be at Oaklawn Cemetery.  Friends may greet the family from 3:00-5:00 p.m. Sunday, April 15 at Bayview/Freeborn Funeral Home and one hour prior to the service at the church on Monday.

Muriel passed away April 3, 2018 at the Mason City Hospice House.

Muriel H. Berry was born on April 25, 1923 in Leland, Iowa, to Bernt and Bertha (Hanna) Haugen.  She spent her youth in Leland, graduating from high school there prior to attending Waldorf College for one year before teaching in a local country school.

On September 17, 1943, Muriel wed Edwin Merle Berry at the Leland Lutheran Church.  For the majority of their 53-year marriage they lived in Emmons, Minnesota where they raised their four children.  Muriel was a farm wife until they moved into town.  She also was employed by Fleetguard Industries for 26 years until her retirement.  Later, she enjoyed the children of Emmons when she went back to work as a lunch lady at the Emmons school.

Muriel was active in the Emmons Lutheran Church for over 60 years.  She enjoyed her Bunko club and exercise class.  She was an avid reader who spent many years volunteering at the Emmons library two days a week.  In addition to her enjoyment of jigsaw puzzles, she had a passion for baseball and her Minnesota Twins.  In her last year, she lived at Mills Harbour Assisted Living in Lake Mills, where she reconnected with many friends from her earlier years.

Memorials are preferred to the Emmons Library or Emmons Cemetery Fund.

To order memorial trees or send flowers to the family in memory of Muriel H. Berry, please visit our flower store.