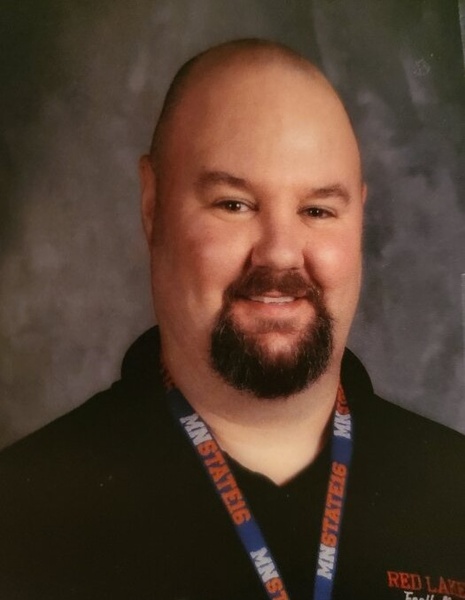 Nathan Ryan Hurlburt (Tiny, Mr. H, Tater, Tate) was born May 4th 1980 in Park Rapids, MN to Tom and Julie Hurlburt.  Nate spent his whole life living in northern Minnesota and loved everything the wildlife provided.  He was an avid fisherman in summer and winter, deer hunter, grouse hunter, and occasional turkey hunter.  He found the most peace in his life being on the water or in the woods. Nate was lovingly embraced by a constant close relationship with his parents which included yard work, conversation and netting fish together. Nate graduated from Nevis High School in 1998 and soon became the head football coach there.  He graduated from Bemidji State University in 2005 with a degree in Education.  BSU would be where he met his future wife Brianna Lind.  After graduation, he accepted a teaching position at Red Lake High School in the fall of 2005 as a Social Studies teacher. He wanted to be a teacher from a young age and never wavered in that decision. While at Red Lake, he held many positions such as teacher, site administrative manager, dean of students, restorative practice teacher, coach, and mentor.  He loved and embraced the life of Red Lake and has always been considered an “honorary member” of the tribe with what he had great pride in. Nate was married to Brianna Lind on November 20th, 2004. They made their home in the Bemidji area and were so proud and excited to buy their first house 3 years ago. Nate was full of life and love and touched the lives of everyone who met him. He was honored to baptize his godfather and uncle, Tim Hurlburt as well as his niece Gigi Frasl. Among his closest relationships was with his “twin” cousin Shawna and her husband Micheal Poncelet. It is hard to put into words the bond between Micheal and Nate. It began when Nate and Aubrey attended daycare at Tony & Dolly Poncelet’s home (Micheal’s parents). It was then that Nate adopted Micheal as his brother. He had such a large group of friends that were just like family. The memories that he created will continue to live on through all the people that he touched and all who had the honor to know him.

Nate will be lovingly remembered by his parents,Tom and Julie Hurlburt, his wife of 16 years Brianna Hurlburt, his sister Aubrey (Lee) Frasl and his niece Gigi and grandmother, Jeanne Boettcher. He will also be remembered by his father and mother in law, Lloyd and Pat Lind and his sister in law, Megan (Travis) Amonson and their children, Jace and Clara Amonson. He also leaves behind his beloved dogs, Daisy and Finnegan, and three cats, Bella, Gemma, Harper.

Special recognition goes out to the Red Lake Boys & Girls Basketball teams, Eva Woods, and the entire Red Lake community who embraced him as their own.

Service information: A public drive through, COVID safe visitation will be held Saturday October 24, 2020 at St. Philips Catholic Church (702 Beltrami Ave NW, Bemidji MN 56601) from 11:30 AM-3:30 PM. Visitation procedures will be shared upon arrival in the parking lot. A separate private service will also be held. There are plans to hold food, family and friends gathering in the future as well.

We ask all who hold Nate dear, to add your photos, videos and provide memories of his to this online memorial page:https://memories.net/timeline/nathan-hurlburt-15974#.X4974DfDpRc.link

To order memorial trees or send flowers to the family in memory of Nathan 'Tiny, H." Ryan Hurlburt, please visit our flower store.