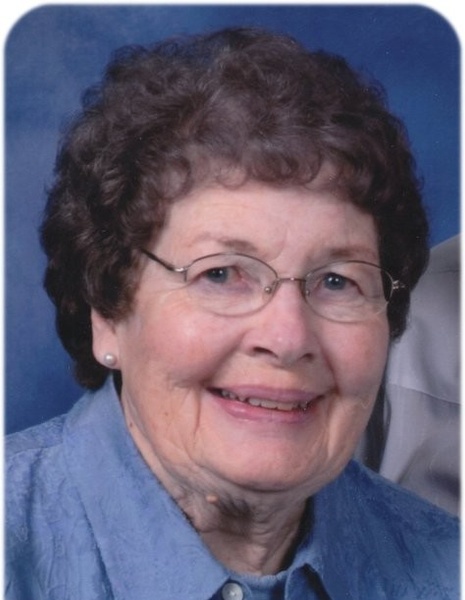 A funeral service for Nita Jenson, 90, of Albert Lea, will be held at 2:00 p.m. Thursday, April 12, 2018 at Trinity Lutheran Church.   Rev. Eileen Woyen will officiate.  Interment will be at Hillcrest Cemetery.  Visitation will be one hour prior to the service at the church.  Online condolences are welcome at www.bayviewfuneral.com

After suffering a fall on Thursday, Nita died unexpectedly in the hospital, Friday afternoon, April 6.

Loneita “Nita” Marie (Nelsen) Jenson was born on April 1, 1928, to Andrew M. and Sophie (Olsen) Nelsen in Albert Lea. She was baptized & confirmed at Trinity Lutheran; graduated from Albert Lea High School in 1946.  During high school, she worked at North Side’s soda fountain, where she met Phil. After graduation, she worked at the First National Bank. On June 12, 1949 she was united in marriage to Philip B. Jenson at Trinity Lutheran Church. Later in life, she returned to work at “Northpark” for 15 years.

Nita and Phil resided at Broadway Farm south of Albert Lea.  Here they were known for their 40+ years of raising/showing Quarter Horses.  Nita’s beauty showed in her outward appearance and her generous spirit.  As a talented farmwife, she was busy feeding/showing horses, raising Australian Shepherds, and handling farm finances. Later as the farm expanded, she was an integral part of the planting and harvesting season while driving tractors and grain trucks.

Nita was blessed with natural artistic ability, beautiful calligraphy skills, and gardening expertise.   She was also an excellent seamstress, a superb cook who loved to entertain, and an avid “500” card player. Nita had leadership roles in Home Extension, church council & church circle groups. She participated in Bible study, her girls’ 4-H activities, and Freeborn County Fair. Nita and Phil often traveled to Branson enjoying country/gospel music.  Nita’s life changed drastically in 2004 when she suffered a stroke affecting her mind. With time and God’s grace she partially recovered never losing her faith.

In lieu of flowers, memorials are preferred to Trinity Lutheran or Youth for Christ.

To order memorial trees or send flowers to the family in memory of Nita Jenson, please visit our flower store.