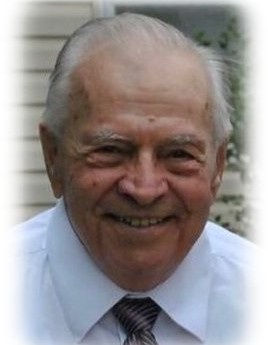 Memorial services for Norman Anders Storvick, age 90, of Bricelyn, MN will be held at 3:00 p.m., Sunday, August 27 at Bayview/Freeborn Funeral Home.  Pastor Kent Otterman will officiate.  Military Honors will be accorded by local servicemen’s organizations.  Friends may greet the family one hour prior to the service at the funeral home on Sunday.  On-line condolences are welcome at bayviewfuneral.com.

Norman was born on Aug. 23, 1926 to Alert C. and Henrietta (Rogness) Storvick. He was raised on the family farm in Glenville, MN and attended Albert Lea High School. He was blessed with two children from his first marriage to Lorraine Thompson and five children from his second marriage to Melisse.

Norman joined the Marine Corps in 1945 and served 19 months as MP on the USS Ranger. He was on the MN Pistol Team before being asked to join the Army Reserves.  For 7 years, he won the MN State Pistol Championship in the 5th Army Reserves and also won the National Championship once. Norman founded Norman’s Nordic Kringle in 1989 in Nevada, IA. It was a family-run business for many years and he took great pride in it, calling it his “best adventure”.

He was preceded in death by his parents, brothers Waldemar Storvick and Adrian Storvick, daughter Cynthia Schwemmler and son Scott Storvick.

In lieu of flowers, the family asks that donations be made to Israel Family Hospice House in Ames, IA, www.mgmc.org/foundation.

To order memorial trees or send flowers to the family in memory of Norman Anders Storvick, please visit our flower store.