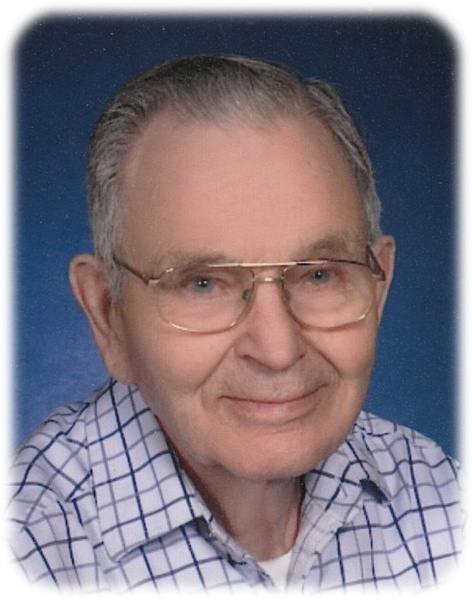 Funeral services for Palmer J. Thompson will be held at 10:30 a.m. Saturday, December 30, 2017 at Central Freeborn Lutheran Church.  Rev. Matt Griggs will officiate.  Interment will be at Central Freeborn Cemetery.  Visitation will be from 5:00 – 7:00 p.m. Friday, December 29, 2017 at Bayview/Freeborn Funeral Home and one hour prior to the service at the church.  Online condolences are welcome at www.bayviewfuneral.com

Palmer James Thompson was born April 19, 1920, to Herbert and Ida (Hoverson) Thompson. He was a lifelong resident of Freeborn County. He attended the Bell School. On February 15, 1942, he was united in marriage to Marjorie Stacia Lysne. After several moves, Palmer and Marjorie made their home on “the farm” by Clarks Grove. Palmer farmed, dehorned cattle for area farmers, and retired from Wilson’s Meat Packing Plant in 1981. Over the years, Palmer served on the boards for Bayview Funeral Home and Barlow School. He also served on the Central Freeborn Church Council.

He enjoyed his fishing trips in Canada with his brothers, taking part in the Camp Courage Wagon Train, and spending time with family and friends. Stories of his antics, sense of humor, and generosity will live on for years to come.

Special thanks to the employees of Knutson Place, the Meadows, Hospice of Mayo Clinic Health Systems, and St. John’s short-term unit for their care of Palmer.

To order memorial trees or send flowers to the family in memory of Palmer Thompson, please visit our flower store.