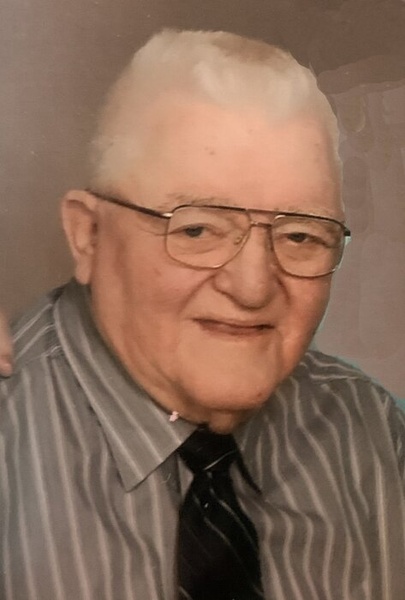 Funeral Service for Paul Foss will be held at 10AM on Wednesday (5/19) at Deer Creek Valley Lutheran Church. Rev. Josh Blair will officiate. Burial will be in Hillcrest Cemetery. Visitation will be from 4-7PM on Tuesday (5/18) at Bayview Freeborn Funeral Home and also 1 hour prior to the funeral on Wednesday at the church. The service will be livestreamed via the Bayview Freeborn Funeral Home Facebook page.

Paul was born on October 13, 1937 in London Township, the son of Harlan and Ione (Tue) Foss.  He grew up on the family farm near Deer Creek and graduated from Northwood High School.  Paul served in the Army for 3 Years, and was based in the Missiles Department in Chicago.

He worked for Sorensen Brothers of Albert Lea running heavy equipment and building roads for 15 years.  He then worked for the Freeborn County Highway Department for 22 years, and had a shop in Myrtle.   He also took over the Foss Family Farm, and had livestock as well as crops.

On September 15, 1963 Paul was united in marriage to Genie Garnas at First Lutheran Church in Northwood, Iowa.  They had four children:  Susan, Sandy, Sara and Eric.

He was a member of the Deer Creek Valley Lutheran Church, taught Sunday School, and served several years on the church counsel.

He was a member of the Freeborn County Pork Producers, and an Adult 4-H Livestock Leader for the Myrtle 4-H Club.

Paul enjoyed hunting and fishing.  He was a true family man.  One of his greatest joys was watching his children and grandchildren at their various activities, whether it was a Volleyball Game or a Sheep Show.  You could always count on Paul to be there cheering from the sidelines.

To order memorial trees or send flowers to the family in memory of Paul Robert Foss, please visit our flower store.