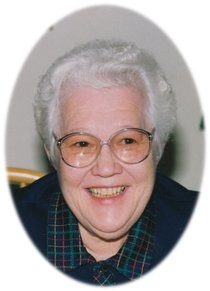 Funeral services for Pauline â€œPDâ€ Mildred Krueger, age 85, of Albert Lea, will be held at 11:00 a.m. on Saturday, February 4, 2017 at Bayview/Freeborn Funeral Home.  Rev. Randy Baldwin and Rev. Tom Jolivette will officiate. Interment will be at Lunder Lutheran Cemetery.  Visitation will be 5:00 â€“ 7:00 p.m. on Friday, February 3, 2017 at Bayview/Freeborn Funeral Home and one hour prior to the service on Saturday.

Pauline Mildred Krueger was born February 14, 1931 in rural Kenyon, Minnesota, the daughter of Maurice and Beatrice (Knutson) Derscheid.  She was baptized and confirmed at Moland Lutheran Church in Kenyon. PD graduated from Kenyon High School in 1949.  She went on to graduate from Abbott Hospital in Minneapolis as a Registered Nurse in 1952.  She worked at several places over the years including Abbott Hospital, Naeve Hospital and St. Johnâ€™s Lutheran Home in Albert Lea until her retirement in 1998. On January 16, 1955, PD was united in marriage to Alan Krueger at Moland Lutheran Church in Kenyon.  She was a member of Lunder Lutheran Church, where she served as organist.  PD was also a member of Lutheran Church Women and Rachel Circle at Lunder and Twin Lakes Senior Citizens.

To order memorial trees or send flowers to the family in memory of Pauline Krueger, please visit our flower store.