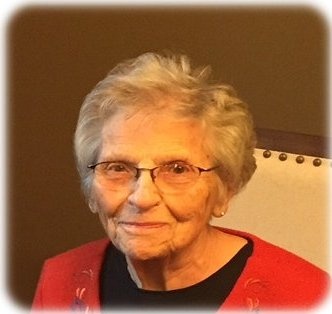 Funeral services for Phyllis Jane Mattson, age 90, of Emmons, MN, will be held at 1:30 p.m. on Monday, May 14, 2018 at Mansfield Lutheran Church.  Pastors Don Rose and Kent Otterman will officiate. Interment will be at the Mansfield Township Cemetery at a later date.  Visitation will be from 5:00-7:00 p.m. Sunday, May 13 at Bayview/Freeborn Funeral Home and one hour prior to the service at the church on Monday.

Phyllis Jane Mattson was born November 5, 1927 in rural Mansfield Township across from Mansfield Lutheran Church, daughter of Frederick “Fred” and Hulda (Buenzow) Katzung. She was born in the same house in which her father was born.  She was a life time member of Mansfield Lutheran Church, where she was baptized, confirmed, and married. The land for the church was donated by her grandparents, Valentine and Christiana Katzung. Her family moved to Conger when she was a young girl and her parents opened Fred’s Café in Conger, MN.  Phyllis attended Conger Elementary School and graduated in 1947 from Albert Lea High School. Her mother cooked and baked for the café at their home. Needless to say, Phyllis had a superb teacher in the kitchen.  Phyllis met Leo Mattson at Mansfield Church Luther League. They were married on June 17, 1947.  Later, they enjoyed being chaperones for the youth Luther League.  Phyllis was a homemaker and prepared many lunches for the crews working on the farm. She enjoyed baking and shared her expertise with her daughters, as well as the Mansfield 4-H Club girls.  While serving as a 4-H leader, she enjoyed hosting bread baking days at her home for the girl members, sharing tips she had learned from her mother.  Phyllis enjoyed embroidering dish towels, quilting, hardanger, and fishing at their pond in the afternoon to have fish for dinner.  She also made lap quilts for the residents at St. John’s Lutheran Home. Canning and freezing the garden produce was an annual ritual. Phyllis worked 13 years at O.K. Skyline Hardware and for her daughter, Cindy, at the Hearing Aid Center in Albert Lea.  She also cleaned homes for neighbors for many years.  Phyllis was a lifetime member of the neighborhood Homemakers Club.  Crane Lake was a very big part of her life.  While there, she looked forward to fishing, watching the wildlife, and reminiscing with family and friends.  It seemed nothing else mattered when she was there.

A special thank you to the staff at Good Samaritan Society, Oak Park Place, Mayo Clinic Health System, and Hospice for the care they provided.

To order memorial trees or send flowers to the family in memory of Phyllis Jane Mattson, please visit our flower store.