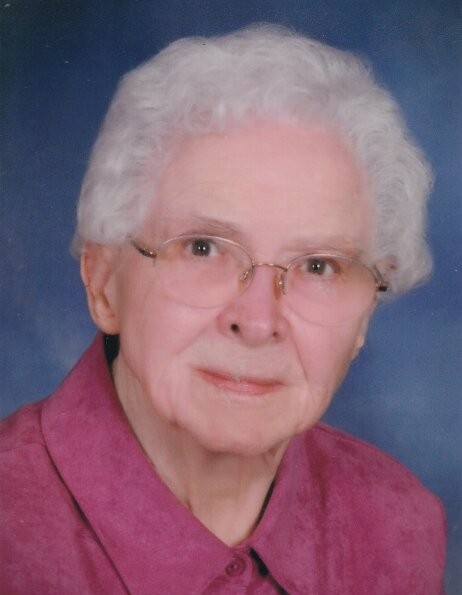 Phyllis passed away on Friday, January 8, 2021 at St. Mary’s Hospital in Rochester, MN. She was the daughter of Byron and Esther (Toenges) Scott.  Born November 8, 1926.  She was baptized at the M.E. Methodist Church.  She attended District 57 country school, and graduated from Albert Lea High School in 1944.  She was a member of Bear Lake Lutheran Church, Ruth Circle and WELCA.  In past years, she was active in 4-H, Clover Valley Homemakers, Freeborn County Extension Group and M.E. Church Community Group.

During WWII, she was employed at the Land O’Lakes Egg Drying Plant. Later she became a Comptometer Operator at Wilson & Company.  At 60, she joined the dietary staff at St. John’s Nursing Home and worked there for 9 years.

Phyllis and Julius Scherb were married in 1947.  The union was blessed with two children Carol Lynn and Gregory.  They lived and farmed in Southwest Albert Lea all their lives.

Phyllis treasured the time spent with her family, relatives and friends.  She enjoyed being with her pet cats and dogs, doing crafts, needle work, playing cards, and board games.

To order memorial trees or send flowers to the family in memory of Phyllis Scherb, please visit our flower store.