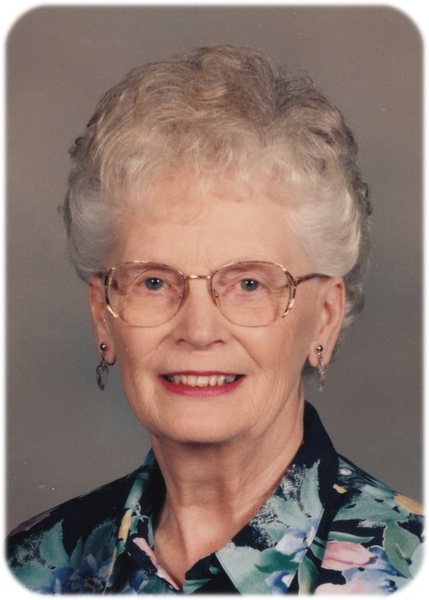 A Celebration of Life for Ramona Peterson will be held Sunday, March 3, 2019 at 2:30 p.m. at Bridge Community Church, 2016 Bridge Ave., Albert Lea.  Visitation will be Saturday, March 2, from 4:00-6:00 p.m. at Bayview/Freeborn Funeral Home and one hour prior to the service at the church on Sunday.  Pastors Richard Merkouris and Clayton Balsley will officiate.  Interment will be at Alden Cemetery.   Online condolences are welcome at www.bayviewfuneral.com.

Ramona went home to be with her Lord and Savior on Tuesday, February 26, 2019.

S. Ramona Peterson, the daughter of Elmer and Naomi Hansen, was born September 13, 1929, in Albert Lea.   She attended and graduated from Albert Lea High School in 1947.  She worked at a dental office in Albert Lea following graduation.  On June 5, 1949, she was united in marriage with Richard Peterson at Calvary Baptist (Bridge Community) Church in Albert Lea, MN. They lived on the Alma Larson farm near Alden until they moved to their farm in 1951 where they lived the rest of their married lives and where they raised their two children.  Their first home was lost to a devastating fire in 1958.  Richard passed away in 2006.  In 2011, Ramona moved into Good Samaritan and then to memory care at Oak Park Place in 2014.  She enjoyed being a farmer’s wife, raising her children and taking care of her grandchildren.

Her first love was her Lord and Savior, Jesus Christ, and she was honored to serve Him at her church, Calvary Baptist in Albert Lea for many years in various positions.  After Richard had a life changing accident in 1984 and became a paraplegic, she became his nurse, the one occupation she had always wanted to be.  She continued to be active in church, taking care of her grandchildren, and was always known for sending everyone cards for all occasions.  Thanks be to God!

In lieu of flowers, memorials can be directed to your choice or Bridge Community Church, 2016 Bridge Ave, Albert Lea, MN 56007.  Our deepest thanks to Oak Park Place and Good Samaritan for the wonderful care she received and to each of you who have prayed for her.  God bless you all.

To order memorial trees or send flowers to the family in memory of Ramona Peterson, please visit our flower store.