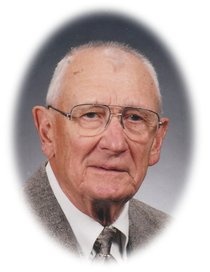 Memorial services for Ray F. Porter, Jr., age 93, of Albert Lea, will be held at 11:00 a.m. on Monday, June 6, 2016 at First Presbyterian Church.  Rev. Dwight Netzer will officiate. Military Honors will be accorded by the V.F.W. and American Legion Honor Guard. Friends may greet the family one hour prior to the service at the church on Monday. Online condolences are welcome at www.bayviewfuneral.com.

Ray F. Porter, Jr. was born July 5, 1922 in Randolph, Minnesota, the son of Ray and Henryetta (Jensen) Porter.  He attended grade school in Randolph.  The family moved to Albert Lea in 1931 and Ray graduated from Albert Lea High School in 1940.  Ray served in the U.S. Army Air Forces during World War II, honorably discharged in February of 1946.  On May 16, 1948, Ray was united in marriage to Ruth Dunbar in Austin.  Ray worked at Wilson Foods for 37 years as a welder and pipe fitter.  He was a member of First Presbyterian Church, the V.F.W., the American Legion, and the Elks.

Ray was preceded in death by his parents; and sisters, Marian (Lyle) Westrum and Joann (Luverne) Sorenson.

To order memorial trees or send flowers to the family in memory of Ray F. Porter, Jr., please visit our flower store.