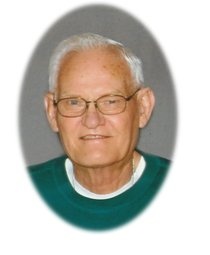 Funeral services for Richard W. Bangs, age 75, of Glenville, will be held at 11:00 a.m. on Friday, December 16, 2016 at First Lutheran Church in Glenville.  Rev. Nancy Hansen will officiate. Interment will be at Greenwood Cemetery.  Visitation will be 5:00 â€“ 7:00 p.m. on Thursday, December 15 at Bayview/Freeborn Funeral Home and one hour prior to the service at the church on Friday. Online condolences are welcome at www.bayviewfuneral.com.

Richard Walter Bangs was born June 19, 1941 in Albert Lea, the son of Walter and Florence (Gustafson) Bangs.  He grew up in Alden and graduated from Alden High School.  On November 17, 1962, Richard married Jean Schlehr at the United Methodist Church in Alden.  Richard was a member of First Lutheran Church in Glenville and served on the church council as a deacon for many years and sang in the choir.  He was on the menâ€™s dartball team at First Lutheran. Richard enjoyed putting together jigsaw puzzles, word find and fill-in puzzles, and was a wheat penny collector.  He also enjoyed fishing, watching his favorite sports teams - the Twins and the Vikings, listening to polka music, and going for walks around town, visiting friends along the way.  Richard and Jean were past members of the Grape Vine Square Dance Club.

To order memorial trees or send flowers to the family in memory of Richard Walter Bangs, please visit our flower store.