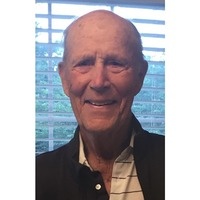 Richard Anthony Noterman completed his journey here on earth on December 20, 2020 and has gone to be with the Lord and reunited with his loved ones who have gone before him; his beautiful wife of 59 years, Arvella, who was his first and only love passed in 2006, their daughter Jane Suzanne in 2010, his sister Patricia Ann in 1945 and many other family members. His path in life was full of love, humor (he had a trademark laugh that everyone loved), compassion, kindness and his loving devotion of God and for his family.

Richard was born April 25, 1929 in Woodstock, Minnesota as the first born of four children to Mathias and Ann Noterman. He and his family resided in Minnesota until 1964 when at the age of 36 he sold his thriving Noterman Insurance Agency and relocated his family to Southern California. He loved to spend summers in MN hunting and fishing and then return to the warm winters of CA.  He was often teased that he was a retiree even though he successfully embarked on a Tax Preparation and Real Estate business while in California.  He later worked for the Federal Government as a claims adjuster for the Department of Federal Crop Insurance until he officially retired. He and Arvella moved to Sun City West, Arizona in 2003 where they cherished longtime friendships with neighbors. As health challenges increased, his daughter Mary Lee and husband Steve aided him and 11 months ago did he move to Trenton, South Carolina to live with his son Brad and wife Janet where he peacefully passed away at home with his loving family by his side.

Richard is survived by his two children, nine grandchildren and thirteen great grandchildren, his sister Marjorie Lee Beane and brother John Noterman (Lynda) and many nieces and nephews.

Wherever Richard went he left a trail of love and kindness remembered by all and an affectionate goodbye that ended with "Lord be with you always."

Private Funeral Services will be held in Albert Lea, Minnesota at Bayview Freeborn Funeral Home on February 5th, 2021 and he will be laid to rest at the Hayward cemetery next to his wife.

To order memorial trees or send flowers to the family in memory of Richard A. Noterman, please visit our flower store.