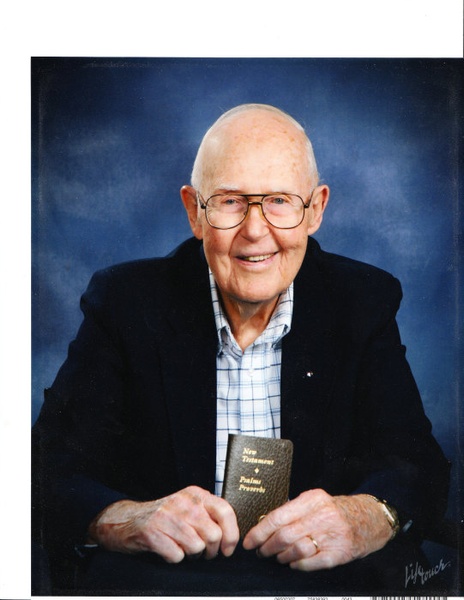 Funeral services for Richard C. Thunstedt, age 98, of Alden, will be held at 10:00 a.m. on
Monday, November 25, 2019 at Bridge Community Church. Pastors Clayton Balsley and
Mark Miller will officiate. Interment will be at Alden Cemetery. Visitation will be from
2:00 – 4:00 p.m. on Sunday at Bayview/Freeborn Funeral Home and one hour prior to the
service at the church on Monday. Online condolences are welcome at
www.bayviewfuneral.com.
Richard Thunstedt died Wednesday, November 20, 2019 at Thorne Crest Senior Living
Community.
Richard Clayton Thunstedt was born on June 8, 1921 to Joel and Anna (Larson)
Thunstedt in Willmar, MN. He attended Willmar schools through 11 th grade. In 1938, he
moved to Hollywood, CA with his family. Dick attended Hollywood High School for his
senior year. He worked at Bank of America until July of 1942 when he joined the Navy.
Dick went through Radio School at Texas A & M and was a Radioman 1 st Class until he
was discharged in 1946. He worked as the assistant manager in the loan department at
Hollywood Sate Bank for the rest of the time he was in California. On June 21, 1949,
Dick married Pearl Peterson and they moved back to Minnesota in 1957. After moving
back to MN, Dick farmed with Richard and Roger Peterson (PP & T) for 21 years. He then
worked with his son, David, until his retirement. Dick attended Willmar Baptist Church
and Bethel Temple (Assembly of God) in L.A., before joining Calvary Baptist (now
Bridge Community) in Albert Lea. While at Calvary, he served as a deacon for 20 years
and as youth leader for 8 years. He was instrumental in starting the Youth for Christ in
Albert Lea. He was also a member of Gideons International serving as a speaker in
numerous churches in Freeborn Country and around the Mesa, AZ area while wintering
there.
Dick enjoyed time spent with family and friends. He also enjoyed a good game of golf
with his golfing buddies.
Richard is survived by his son, David (Liz) Thunstedt; grandsons, Jim (Deb) Thunstedt,
and their children, Lauren, Lindsay, and Kayla, and Eric (Steph) Thunstedt, and their
children, Taylor and Brynn, and special friend Phyllis Meyer.
Richard was preceded in death by his wife, Pearl; and parents, Joel and Anna.

Memorials can be designated to Youth for Christ, Gideons, or Bridge Community Church.

To order memorial trees or send flowers to the family in memory of Richard Clayton Thunstedt, please visit our flower store.