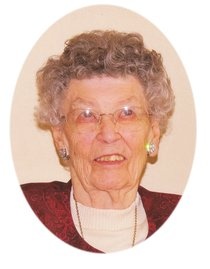 Funeral services for Ruth Haugerud, age 95, of Albert Lea, will be held at 11:00 a.m. on Tuesday, May 31, 2016 at Bayview/Freeborn Funeral Home.  Pastor Matt Hundley will officiate. Interment will be at West Freeborn Cemetery.  Visitation will be one hour prior to the service at the funeral home on Tuesday. Online condolences are welcome at www.bayviewfuneral.com.

On Wednesday, May 25, 2016 we lost our beloved Mother, Grandmother, and Great-grandmother Ruth.  She had lived a good and rewarding 95 years and will be missed by many friends and family.

Ruth L. Christopherson Haugerud was born March 31, 1921 in Minneapolis, the daughter of Ludwig and Ragna (Erickson) Hostad. The family moved to the Morris, Minnesota area and a sister, Olga, joined her.  Her life took a hard turn when she was just 10 years old and her mother Ragna died leaving their father with two little girls. Unable to handle running his business and providing all the care two young girls needed, he asked Ragnaâ€™s sister Emma and her husband Peter near Donnelly, Minnesota if they would be able to care for the girls and they moved in with them.  Ruth grew up and took jobs in Albert Lea and soon met Clair Christopherson of rural Freeborn.  They were married June 6, 1943 at the West Freeborn Lutheran Church.  There they lived and ran the family farm raising their three children, Oscar, Karen, and Glen.  In 1974, her husband Clair passed away and ten years later she met and married Gerhard S. Haugerud.  They had a good life living in Albert Lea until his death in 2003.

Ruth loved embroidery work, taking great joy in giving her handiwork away, as well as reading, and spending time with family and friends.

Ruth was preceded in death by her parents and her husbands, Clair and Gerhard.

To order memorial trees or send flowers to the family in memory of Ruth Luella Haugerud, please visit our flower store.