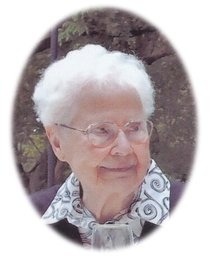 
Memorial services for Shirley Arlene Comstock Phinney and Kenneth Paul Phinney of Albert Lea, will be held at 10:00 a.m. on Saturday, November 5, 2016 at First Presbyterian Church.  Rev. Dwight Netzer will officiate. Friends may greet the family one hour prior to the service at the church.

Shirley was born in Mitchell, SD, on July 7, 1923, to Floyd and Lois Comstock.  She attended country school until entering high school in Mitchell and graduated in 1941.  She met her future husband, Ken, during a church outing when she was in eighth grade.  She later said that she knew right away that he was the one for her.

One of her fondest childhood memories was seeing the creation of Mount Rushmore over the course of several summers.  Along with Shirley and some cousins, her grandmother took them out to the Black Hills, a trip that meant few paved roads and an overnight stay along the way.  These trips were what started her lifelong love of the Black Hills.  On one such trip, Ken had been invited to go along, and it was there that he proposed to Shirley.

In January 1943, she joined Ken in Auburn, AL, where he was attending Naval Training School.  They were married January 30, 1943 in Auburn.  They lived there as well as Memphis, TN, and Fort Lauderdale, FL, before Ken was transferred to California. At that time, Shirley went back to Mitchell, where their first son, Michael, was born.

Shirley worked in clothing stores in Watertown and Albert Lea.  Over time, she developed a fine eye for fashion and became a clothing and accessories buyer for Wallaceâ€™s Department Store in Albert Lea, traveling to Minneapolis and New York on behalf of the store.

After their boys left home, Ken and Shirley moved to Alden, MN, where they lived on a small acreage where Ken fulfilled a dream of owning horses.  She became a partner in an antique and crafts store in Alden called The Calico Corner.

After retirement, they moved back to the Black Hills, where she worked at Mount Rushmore in the art gallery for 6 years.  She made many friends who stayed in touch even after she no longer worked there.  While living in Custer, she started a tradition of inviting friends to her home for Christmas get-togethers.  The parties grew until they had to have several each season.  She was always active in her churches and had a lifetime relationship with God.

Shirley and Ken will return to the Black Hills to be buried together in the National Cemetery in Sturgis.

Memorials preferred to First Presbyterian Church or charity of choice.

To order memorial trees or send flowers to the family in memory of Shirley A Phinney , please visit our flower store.