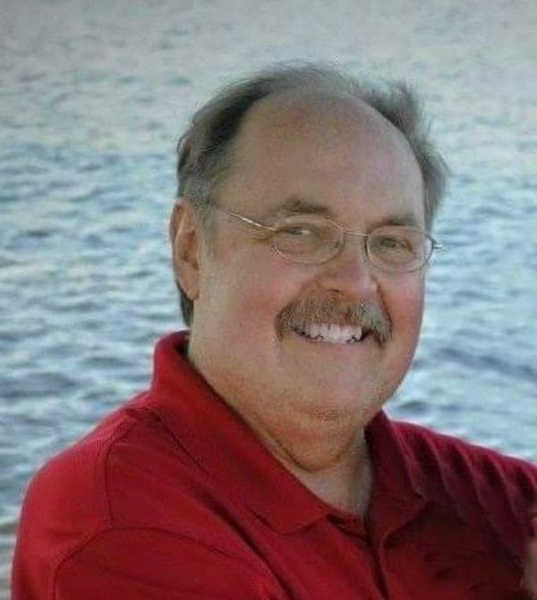 Stefan “Stef” Oftedahl, age 68, passed away on August 23rd in his hometown of Albert Lea, MN. He was a loving husband, father, brother, uncle, and friend to many.

Born to LaVonne (Hovland) and Paul Oftedahl on June 9th, 1954, Stef was always in motion. He loved playing basketball and golf, teaching swimming and lifeguarding at the beach, and listening to The Beatles with his friends. Living just blocks from Green Lea Golf Course, he was able to walk there to play and perfect his game.  As a family, they enjoyed many vacations to the Grand Rapids area. He was baptized and confirmed at First Lutheran Church of Albert Lea and later became a member of Bridge Community Church. He was a graduate of Albert Lea Senior High Class of ‘72 and then went off to Moorhead, MN where he graduated from Concordia College with a degree in history and political science. A trip to a practice round at the Masters and three Paul McCartney concerts with his brother, Paul, were highlights of his life and times he cherished.

Stef met his wife, Jaymee Minear, through mutual friends. They enjoyed camping, visiting friends out of state, the Minnesota State Fair, Mannheim Steamroller Concerts, and good food.  Despite not being sure if he wanted children or not, he was immediately smitten when they welcomed daughter, Brianna, into their lives. There was nothing else that brought him more pride or joy than Brianna did. He coached her in t-ball and went to every bowling league and tournament he could to cheer on Brianna and her team.  The family trip via Amtrak to Buffalo, NY, for bowling for Brianna was quite an adventure enjoyed by all. Besides watching Brianna bowl, visiting Niagara Falls twice on that trip was a special highlight.

Stef loved people and socializing so being a bartender at Captains Quarters brought many new friends and stories. He truly enjoyed his job as a production scheduler for Streater, Inc. and later became a salesman at Flaherty Chevrolet which went well with his love of socializing also.

Stef enjoyed golfing at Green Lea and Rice Lake Golf Courses where he made many friends.  Golfing in tournaments with his buddies Denny, Sticks, and Moosie was something he always looked forward to.  He once complained he was getting older and would never get a hole-in-one.  Amazingly he got four before he was unable to play golf anymore. Going to morning coffee with his coffee friends was something he looked forward to and added to the stories.  Mystery Science Theatre 3000 movies, Stephen King books, music, bulldogs and anything with chocolate were a few of his favorite things.

Despite his numerous heart issues over a number of years, Stef faced each procedure with a positive attitude and joking as much as possible. How the nurses put up with him and his antics during his many hospitalizations is a mystery. Although the last 6 years with the heart pump brought a new set of challenges, he and Jaymee met them head on and she continued to be his biggest source of support until the end.

Stef is survived by his wife, Jaymee; daughter, Brianna and significant other, Jordan Cooper; brother, Paul and his wife Kathy and their children, Kalea and Kyan. Aunt Carla; cousins, David, Peter, Wendy, Sue, and Doug and their families; and in-laws.  He was preceded in death by his parents, Paul and LaVonne; maternal grandparents, J. Henry and Clara Hovland; paternal grandparents, Ben and Bertha Oftedahl, aunts and uncles, Karen, Helen and Ralph, Duane, and Boyd; and father-in-law, James Minear.

Service will be livestreamed from the following link: https://youtu.be/Pe1UaTctkSE

To order memorial trees or send flowers to the family in memory of Stefan Paul Oftedahl , please visit our flower store.