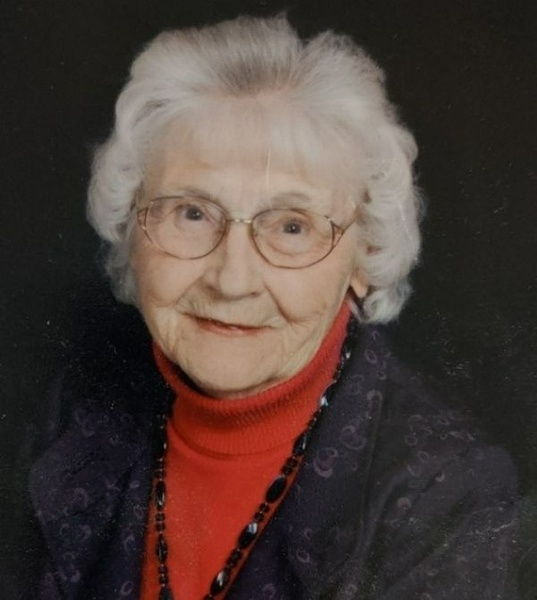 On the morning of December 17, 2021, surrounded by family, Tracy Vandegrift went peacefully home to be with her Lord and join her beloved husband, Doug. Tracy Vande Kamp was born at home in Iowa in 1923, to Henry and Nellie (Post) Vande Kamp. The family later moved to Hollandale, MN. She graduated from Albert Lea High School.

After a whirlwind courtship, Tracy married Doug Vandegrift on Valentine's Day,1945. They celebrated with a wedding skate and continued to enjoy roller skating together throughout most of their 68 years of married life. They made their home on the family farm with Doug’s dad, “Pop,” bringing a welcome woman’s touch back to his life. Tracy generously shared her beloved close-knit and extensive family with them.

Tracy and Doug joined the United Methodist Church, where they worshipped, made friends, and served faithfully at the local, district, and conference levels. Tracy's involvement in UMW, Circle, choir, and sanctuary decoration were especially rewarding to her. She prioritized praying for family and friends on a daily basis.

As their life progressed, Doug and Tracy were blessed with seven children. In addition, Tracy was a vital partner in the creation and development of Vandegrift Dairy Equipment, which operated from 1963 to 2007. Her quick and solid business sense kept the administrative aspects of the business on track while Doug was the field expert.

After finding an even deeper love of their own through the Marriage Enrichment Program, Doug and Tracy found incredible joy in serving God and encouraging other married couples through Marriage Enrichment retreats. It proved to be one of the most important aspects of their life together.

Tracy enjoyed exploring the world with Doug, almost always visiting family members enroute. She was adventurous -- skydiving at 70, still roller skating at 80, and ziplining at 90. Card and board games were an integral part of the family tradition Doug and Tracy created. Tracy’s playful and competitive spirit was recognized by all of her descendants, and yes, they frequently lost to her! Tracy lovingly cared for Doug at home after his tractor accident in 2008, until he died peacefully in her arms in 2013. She felt Doug’s presence at the farm and lived there nearly 75 years.

Tracy’s favorite pastimes were working on creative projects, whether sewing, decorating cakes, home remodeling, flower gardening, writing poetry, or artistically documenting their travels. She created a welcoming home environment for their family and many others in need. Giving blood and volunteering were priorities in her life.

Tracy exemplified learning as a way of life; the encyclopedias and dictionary were consulted at least once a day. She found ways to be supportive of her children’s interests, teaching them to think, have faith, and take action. She nurtured the family's musical gifts and added her lovely voice and delightful whistling to Doug’s harmonica and to many hymn sings around the family piano.

Tracy had a keen eye and was always noticing and teaching others to notice God’s glory in the world around her. She treasured family time spent at the ravine and creek, thrilled at finding and sharing each spring flower. She especially loved birds and her mimicry of bird calls is a touching memory for the family.

Her love, integrity, and influence will endure in our hearts and lives.

A Celebration of Life service will be held at Bayview Funeral Home at 2:00 o'clock on Wednesday, December 22. Visitation will be one hour prior to the service. Following the service, Tracy will be gently laid to rest next to Doug at Graceland Cemetery. Memorials are welcomed and may be directed to the United Methodist Church, Freeborn County Historical Society for the Itasca Rock Garden, or American Red Cross.

Freeborn County Historical Society, Itasca Rock Garden. (The specific donation project can be designated in the same screen as the dollar amount).

To order memorial trees or send flowers to the family in memory of Tracy Vandegrift, please visit our flower store.