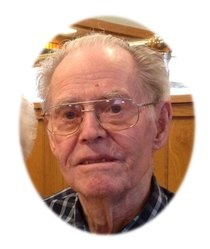 Verl Albert Wallin
Funeral services for Verl Albert Wallin, age 97, of Glenville, will be held at 2:00 p.m. Tuesday, September 20, 2016 at the First Lutheran Church in Glenville.  Rev. Wendy Anderson and Rev. Nancy Hansen will officiate.  Interment will be at Greenwood Cemetery.  Visitation will be one hour prior to the service at the church.
Verl died Saturday, September 17, 2016 at ThorneCrest Retirement Community.
Verl Albert Wallin was born October 17, 1918, the son of Rea Loen and Bertha Marie (Lilliskau) Wallin.  He grew up in rural Glenville and attended country school in Glenville.  On April 25, 1943 Verl was united in marriage to Vera Arlene Tuttle.  Verl and Vera made their home in the Glenville area where he farmed all of his life.  They enjoyed spending winters in Mesa, AZ.  He was an active lifetime member of First Lutheran Church in Glenville and served on the Dist. #65 school board.  In his younger years, Verl enjoyed playing pool and dartball, riding bike in the park and square dancing.
Survivors include his wife Vera; children Doug (Julie) Wallin and Kathleen (Gordon) Toenges; 8 grandchildren; 19 great grandchildren; brothers Dale (Erma) Wallin and Arlo (Julie) Wallin; sister Violet (Eddie) Hanssen; sister-in-law Susie Wallin and many nieces and nephews.
Verl was preceded in death by his parents; children Sylvia and Darryl in infancy, great-grandchildren William and Kylie Sparrow,  and brothers Merlin Wallin and Lyle (Arlene) Wallin.

To order memorial trees or send flowers to the family in memory of Verl Wallin, please visit our flower store.