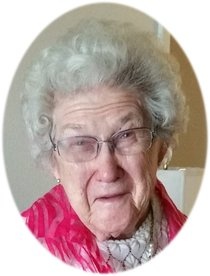 Funeral services for Verliss Delphine (Lofthus) Lair, age 92, of Albert Lea, will be held at 10:30 a.m. Tuesday, March 29, 2016 at St. Theodore Catholic Church in Albert Lea. Father Russell Scepaniak will officiate. Interment will be in St. Theodore Cemetery. Visitation will be from 4:00 to 7:00 p.m. on Monday, March 28, 2016 at Bayview/Freeborn Funeral Home; and also one hour prior to the time of the service at the church.

Verliss went to her Heavenly home peacefully at 5:20 p.m. on Thursday, March 24, 2016 at the Good Samaritan Center in Albert Lea surrounded by her husband and family.

Verliss Delphine Lair was born on March 3, 1924 to Nickolai and Lila Mertie (Nagel) Lofthus in Nunda Township. She was baptized on April 11, 1924 at Lime Creek Lutheran Church in Emmons. She was confirmed on May 14, 1939 at Emmons Lutheran Church. She graduated from Emmons High School in 1941, had one year teacherâ€™s training in Austin, and taught 8 grades of country school for one year. She then devoted her life as a loving housewife and mom.

Verliss married James Leonard â€œPatâ€ Lair on July 22, 1943 at St. Theodore Catholic Church, celebrating their wedding dinner at the A & W Root Beer Stand. They made their home in rural Emmons from 1943â€“early 1949 and moved to their farm in rural Hayward in 1949. Verliss briefly owned and operated the Lair CafÃ© in Hayward. They moved to rural Albert Lea in 1985, into a twin home in 2011, and then to Good Samaritan-Hidden Creek in 2013.

Verliss was well known for being a practical jokester, telling jokes wherever she was, and her sense of humor. She was always busy from dawn until the wee hours of the night--even grocery shopping at midnight, enjoyed talking on the telephone, cooking and baking, fishing, traveling, and her card parties. She played a mean hand of 500! Verliss was always taking care of others, talked to complete strangers, loved all people especially her entire family and dear friends. Verliss was very loving, caring, compassionate, and had a big heart.

The family extends their gratitude to the entire staff of Good Samaritan for taking such good care of Verliss.

To order memorial trees or send flowers to the family in memory of Verliss Delphine Lair, please visit our flower store.