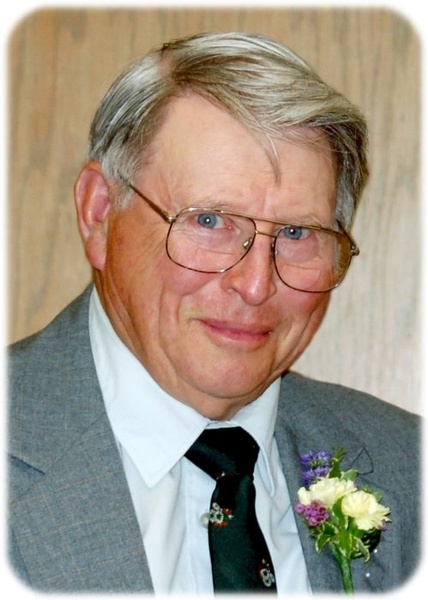 A Celebration of Life service for Wayne N. Huntley, age 89 of Emmons, MN, will be held at Emmons Lutheran Church on Friday, March 1st at 11 a.m. Pastor David Schafer will officiate. Burial will be at Oaklawn Cemetery with Military Rites accorded by the Emmons American Legion. Visitation will be from 4 to 6 p.m. Thursday at Bayview/Freeborn Funeral Home and one hour prior to the service at the church. Online condolences are welcome at www.bayviewfuneral.com.

Wayne passed away peacefully on February 23, 2019 in the comfort of his home, surrounded by family.

Wayne was born on June 13, 1929 to Kennes F. and Leona (Brandt) Huntley in Toeterville, IA. He was baptized and confirmed at St. Peter Lutheran Church in Toeterville and graduated from St. Ansgar High School in 1949. On June 1, 1957 he married Verlys Schmitt at the United Methodist Church in Albert Lea.

Wayne had an amazing memory and loved telling stories about his childhood, his days in the Air Force in St. Louis, his coaching, his friendships throughout the years, and his experiences as a father. He enjoyed history, including a trip to Germany where he visited WWII sites and met some of Verlys’ relatives. He enjoyed simple things in life; playing cards, reading the paper, Twins games, polishing apples, and chatting with friends. He enjoyed sitting in his favorite recliner watching sports, old-time dancing, and the Lone Ranger on TV.

Wayne served many roles during his lifetime. He was a veteran of the Air Force, serving from 1951 to 1955 at Scott A.F. Base in St. Louis, with many enjoyable memories. He had a lifetime love of sports as a participant, coach, and fan. He coached several youth sports teams in Emmons and taught the basics of the sport, good sportsmanship, and fairness.

Wayne worked at Wilson & Co. for 33 years and following retirement, he and Verlys began a farmer’s market business, which he enjoyed for 28 years. He treated everyone with kindness and considered his customers as friends.

As an active member of Emmons Lutheran Church, his faith was very important in his life. He always felt that God was watching out for him.

His family will remember him as a storyteller, a man with an amazing memory, a lover of sports, and someone who enjoyed sweet treats, especially ice cream.

He was preceded in death by a brother, Howard, in infancy; and his parents, Kennes F. and Leona Huntley.

“How lucky I am to have something that makes saying goodbye so hard.” A.A. Milne

To order memorial trees or send flowers to the family in memory of Wayne N. Huntley, please visit our flower store.