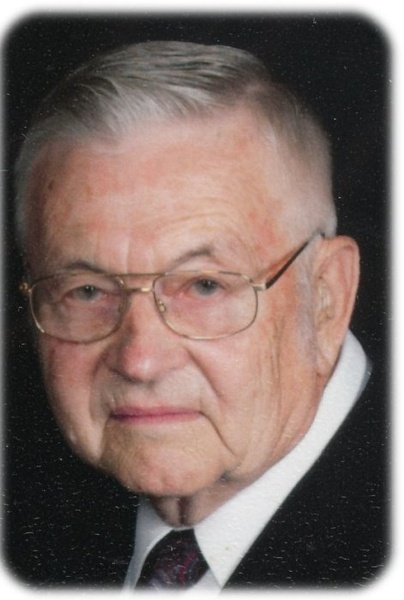 Funeral services for Wesley R. Nelson, age 99, of Albert Lea, MN, will be held at 11:00 a.m. on Saturday, September 14, 2019, with military honors at Bridge Community Church, Albert Lea.  Pastor Mark Miller will officiate.  Interment will be at Clarks Grove Baptist Cemetery.  Visitation will be one hour prior to the service at the church on Saturday.  Online condolences are welcome at www.bayviewfuneral.com.

Wesley Robert “Wes” Nelson died Saturday, September 7, 2019, at Good Samaritan Society. Wes was born June 8, 1920, in Alden, MN, where he graduated high school and helped on the family farm southeast of town until he was 21.  In 1942, he enlisted in the Army Air Corp, serving as an airplane mechanic during WWII, spending the last time of his service on Iwo Jima.  After returning from the war, Wes learned the trade of auto mechanic, which he applied during all of his working career.  He was a longtime employee of Evans Motors.  If something had an engine, Wes could make it run.  Wes married Shirley L. Christian on January 12, 1947.  They were married 72 years!  Wes and Shirley were longtime residents of Albert Lea.  They lived in their house on E. Eighth Street for 68 years.  In that home, they raised three children, Craig, Judy, and Brian.

Given his strong Christian faith, Wes was very active in his church, Calvary Baptist Church (now Bridge Community Church).  He served on church committees, loved singing in the choir, and helped with youth groups.  Wes spent countless hours maintaining and generally keeping the church ministry buses on the road.

For the past two years, Wes and Shirley have resided at Bancroft Creek Senior Apartments.  At Bancroft Creek, Wes fully enjoyed the staff and residents.  He especially enjoyed bible study and hymn sing with Pastor Kent Otterman.

Wes was a dedicated Christian, husband, father, grandfather, and great-grandfather.  He was a tolerant, kind, and gentle gentleman, honest as the day is long and known for his quick and dry wit.

Wes enjoyed watching Twins and Vikings games.  Family camping, golfing, and applying his skills to make something useful in a second life were hallmarks for Wes.

To order memorial trees or send flowers to the family in memory of Wesley R. Nelson, please visit our flower store.