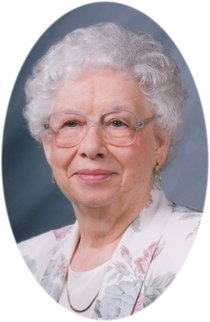 Memorial services for Winifred Frances (George) Oetjen, age 96, of Albert Lea, will be held at 2:00 p.m. on Friday, August 19, 2016 at First Presbyterian Church in Albert Lea.  Rev. Dwight Netzer will officiate.  Friends may greet the family one hour prior to the service at the church.

Winifred Frances George was born in Grinnell, Iowa on March 18, 1920 to Helen (Coutts) and Russell George.  She graduated from Grinnell High School and then from Grinnell College in 1942. Following graduation, she was employed by Bankers Life Company in Des Moines, Iowa. On August 3, 1943 she was united in marriage with George E. Oetjen in Herrick Chapel at Grinnell College. They moved to New Orleans where Lt. Oetjen was a Port Officer at the New Orleans Port of Embarkation during WWII. In June 1946 they moved to Mason City, Iowa and then to Albert Lea in March of 1948. In 1964 Winifred began employment with the Four Seasons Companies, retiring in 1988. During this time, she worked in travel and greatly enjoyed meeting people, helping them plan their vacations, and visiting other parts of the world.

She was a member of the First Presbyterian Church of Albert Lea, proudly serving as a deacon, elder and Stephen minister. She was an active member of the Womenâ€™s Investment Group, the American Association of University Women, the Travel Class of Albert Lea, and a 50-year member of Chapter CV of the PEO Sisterhood. She served in many volunteer activities in her church and in the community. She especially cherished her church family and her PEO sisters.

In her lifetime her family and her church were most important to her. She greatly enjoyed and felt blessed by her many friends and was deeply proud of the accomplishments of her children and grandchildren.  Wini enjoyed travels in her work and also with her husband and children. Reading, writing, and entertaining gave her much pleasure and she took great pride in her Scottish heritage.

Winiâ€™s request was that in lieu of flowers, memorials be made to Youth for Christ (116 W. Clark Street, Albert Lea, MN) or the ecumenical food pantry at the First Presbyterian Church of Albert Lea.

To order memorial trees or send flowers to the family in memory of Winifred Frances Oetjen, please visit our flower store.